The store will not work correctly in the case when cookies are disabled.
The wishlist name can't be left blank
Skip to Content
US
My Account
Toggle Nav

15 Best Balloon Games for Kids: Ideas for Parties and Just for Fun 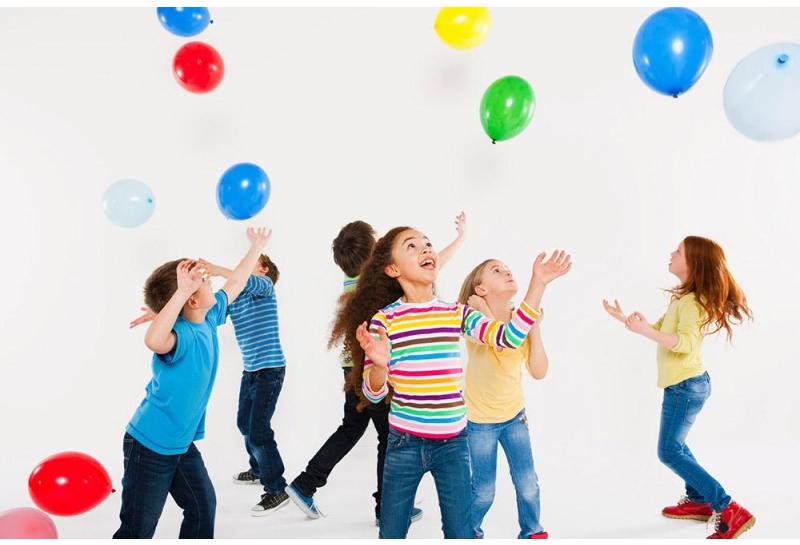 15 Best Balloon Games for Kids: Ideas for Parties and Just for Fun

Balloons are the easiest way to create a fun party for kids. Not only will they be excited by colorful decorations, but balloons also acquire great diversity and can be a last-moment party game for cheap. Kids love playing with inflatable toys for many reasons. Firstly, inflatables are very safe and non-traumatic even if the kids choose to get a little aggressive with fun banter. Secondly, they are very cost-effective, so parents can buy plenty of toys without splurging on games.

We are happy to present you with the best balloon games for kids and teenagers that will without a doubt impress the whole household.

Benefits of balloon games for kids

So why do kids prefer playing with inflatable toys and balloons instead of something more heavyweight? These are the major reasons parents should choose them for decoration and party games:

You will have no problem with minding your business while kids can safely play with balloons because nobody is going to get injured due to weightless materials. Even if the kids pop the balloons, the most trauma they will get is a shock from the loud pop. Other than that, you shouldn't have any problem decorating your venue with balloons.

They are cheap and disposable

On the contrary to heavy and expensive game sets, you can invite a bunch of neighborhood kids to have their party without fear of destroying the lawn or the house. No matter how naughty kids get, you can simply buy a bunch of other latex balls or pre-purchase them and store them in your house.

There are thousands of combinations of games

When it comes to balloons, kids can create their vision, decorating the lawn or actively playing with inflatable toys outside or inside the house. Numerous famous games don't require much preparation, which is great for both children and their parents. 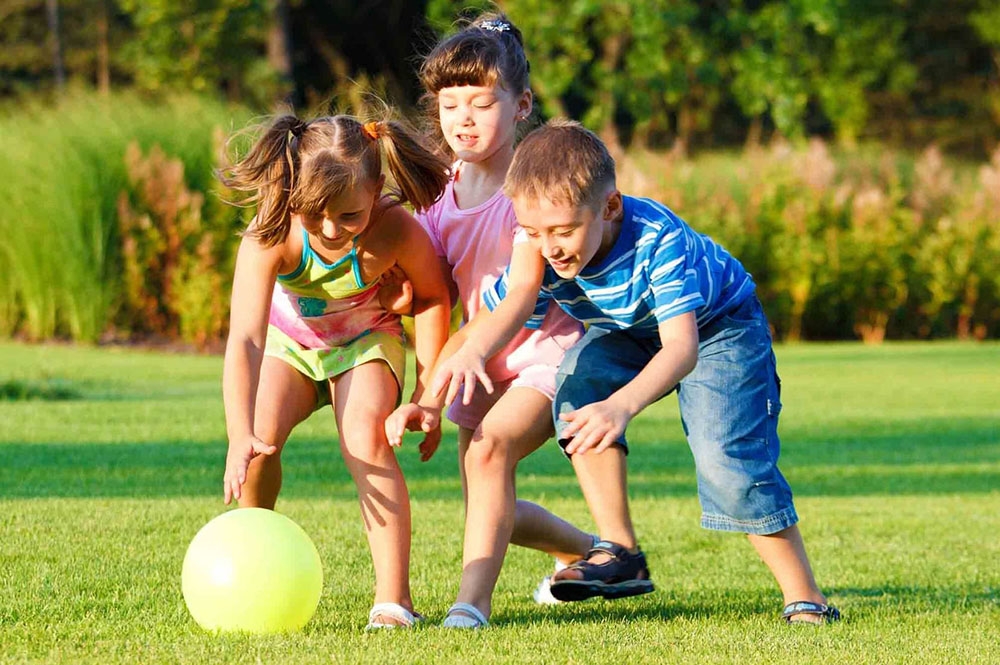 15 balloon games for teens and children

None of these games require much preparation, making it easy for parents to prepare for a children's party. These are the best balloon games for kids party you can create within an hour:

This game is very diverse and meant for pre-teens and teens. The goal of the game is to divide into two teams, one of each forms football gates with their hands while the other team tries to score a goal by directing a balloon into the gates. They can do it by using a fan or a racket. This game doesn't require much preparation as it is one of the easiest balloon kids games.

This game was meant for 6 to 7-year-olds who love team sports. The goal of this game is to hold the ball between their legs and jump like a kangaroo. Each kid has a little sack with a bunch of toys they have to place in a box and pass the baton to another kid. The length of this race track is about five meters. The game stops when one of the teams has all of their toys in the box. Hands down one of those fun balloon games for kids.

It's another variation of the Kangaroo game, but with different rules. A kid has to hold the balloon between their ankles, trying to win the three-meter race. However, kids don't have to jump as they have to pass this track be slowly but steadily trotting their way to the finish line.

You have to throw as many balloons on the ground as possible. Note: your inflatables don’t need to have a ribbon attached. The goal is to lift the balloon without a ribbon and hold it with your teeth, fingers, toes. Kids can get creative as the game develops motor skills. It’s one of the best balloon games for kids parties because everyone gets involved in a treasure hunt.

This game is excellent for older kids and teens. For this one, you will need a long inflatable balloons. You can make a toy sword out of a balloon or leave the inflatable as it is. The rule is as follows: you have to draw a circle with chalk and let the kids have a playfight. The goal is to push someone out of the circle with a balloon sword.

Let the children gather in a circle. You have to place a box with a mystery prize and put it in the center of the circle. Get every kid an inflated balloon (to each their specific color.) But the plot twist is as follows: don’t tie a knot in your inflated balloon and let the kids hold it with their fingers. Each kid has to let it fly. The trajectory will be difficult to predict, so it’s a wild guess game. The winner is a child whose balloon will land the closest to the prize. 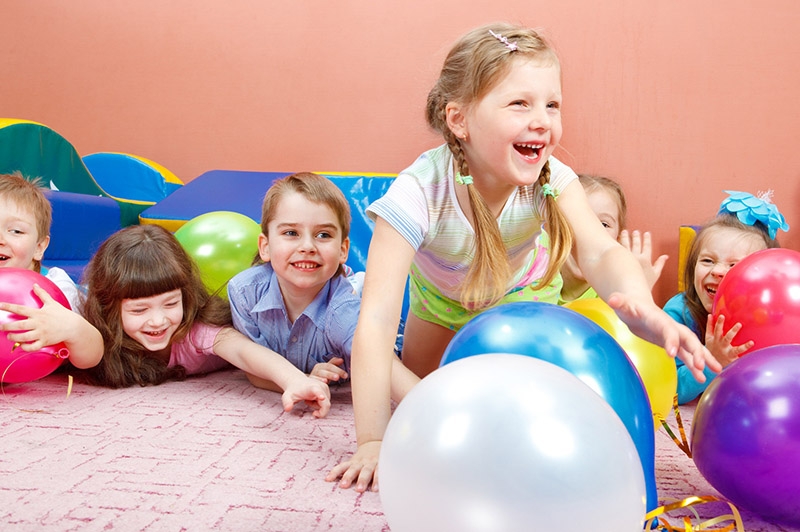 It is one of the best balloon-bursting games for kids. You have to inflate the balloon with candy inside. Throw those inflatables on the ground and let children pop them with any of their body parts. Whoever pops the most wins.

Prepare inflatables of different shapes and colors, and let children get creative. With scotch tape, they have to build a figure of a man or a woman and add facial features. Note: this game involves adult assistance as the build needs scissors.

This game takes at least two children. You have to attach a balloon to the kid’s foot. The goal of their competitor is to pop someone else’s balloon. Whoever stays with an untouched balloon wins the race. It’s one of the most interesting balloon games for teens as well.

It’s one of the best balloon games for children. For this one, you will need helium inflatables. Let them float by the ceiling with only ribbons reaching children’s height. Then, assign every kid with their color and let the balloons hang randomly. The goal of the game is to snatch as many balls of their assigned color as possible.

Put a small gift in every balloon and let kids pop them at the end of the party. Each child gets a prize so everyone is a winner. 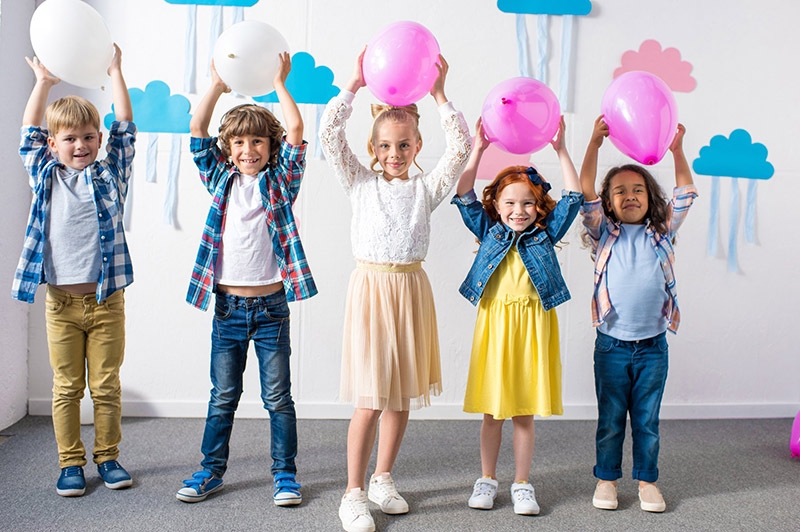 Give kids inflated balls and let them inflate them. Them, children let the inflatable float. Whoever has their balloon fly the longest distance is a winner.

Place a colorful ribbon at the center of the room and divide kids into two teams. Whatever team blows the balloon faster wins. It’s one of the best balloon games for kids indoor activities.

Assign a colorful inflatable to different vegetables/fruits and let kids compete in collecting them in the bag. Whoever picks the most imaginable “apples” and “bananas” wins.

How to use inflatable balloons at a party

Balloons are made of multi-colored latex. They come in different shapes and configurations, with and without inscriptions. Colors can be chosen, taking into account the interior features and holiday ideas. Babies love tactile sensations, so you need to create all the conditions for contact with inflatable balls. Here are several ways to do it:

After being filled with air or helium, balloons are fixed with a string, which is held firmly in the hands of the child. The ball becomes part of his game and helps them adapt faster to an unfamiliar environment. Children immediately remember their favorite heroes of fairy tales: Winnie the Pooh, a Little Mermade, etc. A balloon in their imagination is a part of a cheerful mood and a fantastic holiday.

So that the balls do not scare children when they burst, they need to be inflated within the limits of size. Latex has a stretch limit. A correctly inflated ball holds air for a long time, does not burst, passes from hand to hand, and flies up to the ceiling, causing a child's joyful laughter.

Balloon games are a fun way of amusing your children for cheap and without much preparation. Be creative and invent more fun games. Balloons Online provides the best balloons for any occasion at prices that make sense. Check us out at balloons.online!